We are certainly having lots of fun on our travels.  One thing we are noticing is the amount of elderly men who like to travel around by themselves.  Wayne often has a chat with these men and usually their vans are their permanent homes.  One man, Charles told Wayne that his wife didnt want to travel so he divorced her and is now happy to get around by himself!

We have met a few families with kids, but with the school holidays ending, that will change.  If we see a really great park we always stop so the kids can have a good run around and possibly play with other kids their age (usually in the afternoon). 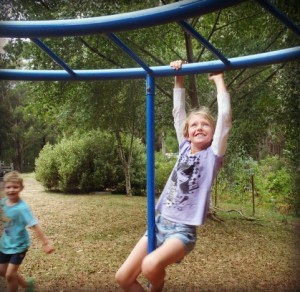 We also get to meet LOTS of puppy dogs on our travels and the kids love to cuddle and pet when allowed by the owner. 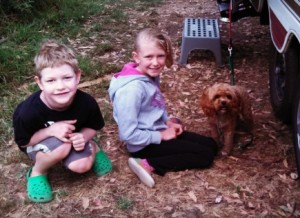 Our van is certainly getting lots of attention and we often forget how unusual it is.  Often we are ready to head out and someone will come along for a chat, so now we do factor in ‘chat time’, so we dont get stressed if we leave later than planned.  It’s always lovely to meet and chat to new people and most are very interested in what we are doing and the fact we are travelling for such a long time with young kids.  We havent had to make too many modifications, but have invested in a mozzie/fly screen for the front door and Wayne has made some adjustments to the back screen to stop insects getting in. 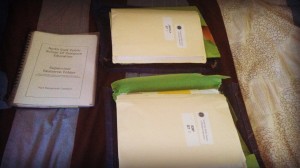 School starts today, so that means we need to get organised with Distant Education and all the paperwork and folders.  Im a bit nervous to be honest but looking forward to getting into it and starting the kids in Year 1 and Year 4.  I think once i get used to what we have to do, how to send things to our teacher and what is required, i will start to enjoy it more.

We arrived in Heyfield on the 15th January, which also happened to be the hottest day so far.  I think it was about 44C and as this was a free camp, we had no power so had to use our generator.  It wasnt happy at all, so since then we have bought a more powerful generator capable of running the air/con AND everything else at the same time.  We mainly stayed inside and played on the computer and tablets.  Luckily it got cooler as the day progressed, but we didnt sleep well at all that night.

Afterwards, we booked ourselves into Rawson Caravan Park for 3 nights and were quite thrilled to get power, water, sullage and an ensuite for $30 per site per night.  It also had lovely tall trees all around us, which helped cooled things down. 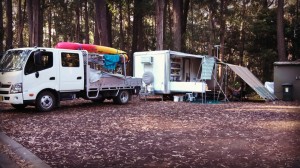 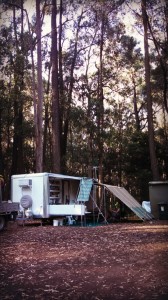 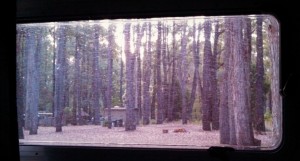 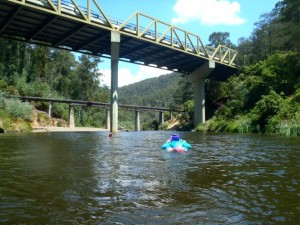 I was busy keeping up with all the clothes washing the first day we got there.  Another very hot day on the 17th, but we had the air/con on all day and went for a lovely swim in the Thomson River.  Quite a shock to swim in 22C while its 42C outside!

The next day we went to Walhalla, a wonderful historic town.  We did the long tunnel gold mine, the cemetery and the old post office. 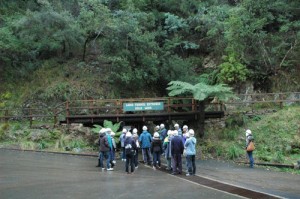 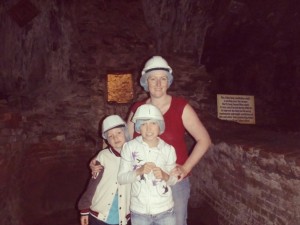 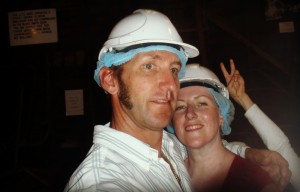 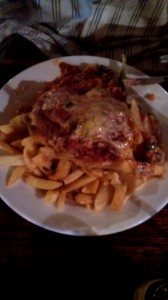 Unfortunately the Goldfields Railway was closed due to a total fire ban, we were so disappointed, it looked amazing.  That night we had dinner at the Stockyard Hotel, where we ate the biggest meal of our lives.  Most meals were $20 and were out of this world.  Wayne had the Parmi Salami and i had fish n chips.  The waitress was most impressed with Wayne as he left a clean plate, she said not many people did!!!  Even with the kids helping me (after their own meals) i still had too much left over.  Great place with a great country atmosphere.

Left Rawson for some shopping and supplies and headed to Poowong for a night of free camp.  Rory loved the name, thought it was hilarious.

On the 20th we arrived at Corinella Caravan Park for 3 nights.  Great spot right near the water with lots of soft spongy grass to walk on and close to amenities.  The jetty was only a couple of minutes walk away and we were amazed to see a giant seal come up to us looking for food and then a huge stingray swim by.  Loads of people were fishing off the jetty, so Wayne thought it would be his lucky day, but alas, no fish or squid caught! 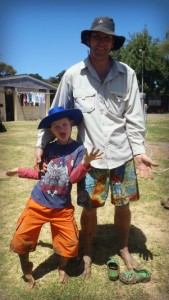 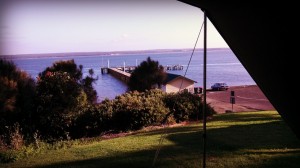 View of water and jetty from our van 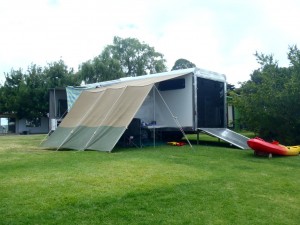 Our wonderful set up, look at the soft spongy grass 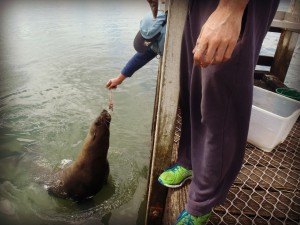 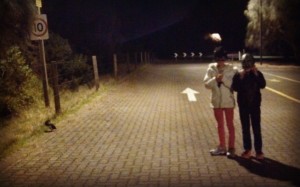 The wee little penguin we found near our truck!

That night we headed to Phillip Island to see the Fairy Penguins, it was freezing!!!!  Boy have we had some changes in temperature in the last couple of weeks.  The penguins were so very cute, we even found one walking around the car park while leaving.  Other than that we had a lovely time in Corinella and met some lovely people (hi Robert and Harry!). 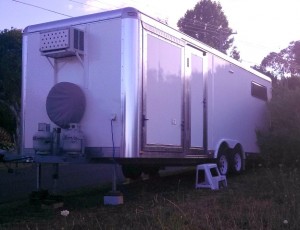 On the 22nd we arrived at Gail and Robbie’s for a few days.  We parked our van out the front and had to jack the caravan up the highest it’s ever been so it was level.  A bit scary to be honest, we had to enforce to the kids not to jump around inside!

Our stay with Gail and Robbie was just wonderful.  Gail is an amazing cook and everynight there was some awesome desserts like sticky date pudding, lemon meringue pie and apple pie.  We were thoroughly spoilt with the best cuts of meat (thanks Robbie), salads and baked potatoes with cornflakes and melted cheese.  It was so hard to leave, we were made to feel so welcome and at home, the kids were very upset to leave as they said Robbie was fun and Gail was so kind! 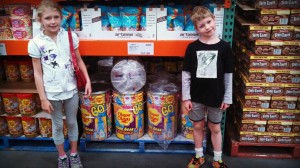 Whilst at Chernside Park, we had our first trip to Costco (Ringwood), which was quite amazing and a little bit overwhelming lol.  You dont need lunch as they have so many food taste testing.  Rory nearly fell over when he saw the free chocolate available!!!  You can even buy chuppa chups in bulk…

We also had a nice time, the next day at Yarra Valley Chocolaterie (more free chocolate aarrggghh), Lilydale Park and also, by accident, stumbled upon a remote control car circuit where people were racing their cars.  It was so much fun to watch!  Thanks again Gail and Robbie for your hospitality and making us feel so welcomed! 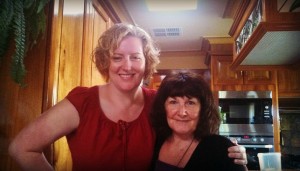 The next day was Australia Day, so we headed to Yallambie to visit our mate Duncan.  He had a few people over for a bbq, so we found a perfect spot for the van and have been happily settled in here, amongst the trees, for the last two days. 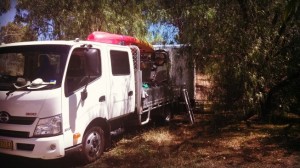 Nestled happily amongst the trees at Duncan’s.

We plan on staying for a couple of more nights (as I would like to catch up with my friend Carmen).  It’s been great to catch up with Duncan and his wife Lee and his dog called Dog.  Once again the weather has been very hot here, but we are in for a cooler change tomorrow!  Im still not used to the dry heat of Victoria compared to the humid heat of NSW.  Thank goodness for airconditioning!  Thanks Duncan and Lee for letting your home be our home for a few days.

Next stop is Ballarat!