We arrived in Naracoorte on the 15th February.  We parked our van in a vacant block right behind Wayne’s Uncle Atze’s house and were grateful to be powered up and use their shower.  It was lovely to see Atze again, although he is a bit sick at the moment.  The kids had not met their great uncle, so it was wonderful to introduce them to their South Australian family include Aunty Shirley.  We also caught up with Wayne’s cousin Vanita and her girls Talia and Gemma.  Jakayla very much enjoyed playing with her (second??) cousins and we had a lovely dinner with Vanita at her house.  The kids also enjoyed chatting to Azte’s cockatoo called Cocky!  He was such a chatterbox, and was a brilliant mimic, especially calling out to the (dead for 8 years) cat and meowing, barking like a dog (that died several years ago), asking for a cup of tea, calling people ratbags and making the sound of a car starting.

We spent a bit of time at Naracoorte library doing school work, free wifi and a lovely table/chairs certainly makes school work a bit easier.  Where possible we try and visit libraries and the kids seem more focused on their work than in the van!

Wayne spent a day getting the A-frame reinforced at a local welders shop, unfortunately the original A-frame was so weak it was starting to bend.  The joys of travelling!!! 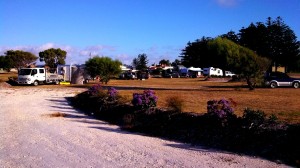 On the 18th we arrived at Kingston and stayed at a lovely council run campground.  It was also very popular and we had quite a few other vans staying near us.  This was the start of Wayne and his determination to catch squid and/or fish.  Unfortunately the wind was quite strong and cold, apparently squid like warmer days, a light swell and clear water!  We ended up staying a couple of days here, mostly inside the van due to the cold rainy weather. 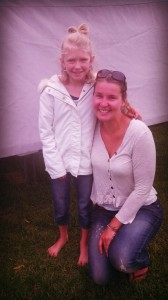 Our next stop was Narrung Ferry Camp Ground which had loads of soft spongy grass for the kids to play on, they loved it!  We met Natalie from Germany here, and her and Jakayla got on like a house on fire.  She even sat down with Jakayla and was teaching her to speak and write in German.  Natalie has even invited Jakayla to visit her in Germany one day, how exciting!  Hope she doesn’t mind her mother tagging along 😉

On the way to our next stop, we drove through Murray Bridge and stocked up on some supplies.  Our dear friend Brendan is from here and he was thrilled to hear we weren’t robbed or kidnapped whilst driving through 😉

We arrived in Munno Para later that day and set up camp in the vacant block opposite Wayne’s mum and her husband Malcolm’s house.  We weren’t really allowed to park there as the block was bought, but it was empty and we were doing no harm or making any mess.  The kids loved seeing their grandparents and I certainly enjoyed some lovely hot showers and cooking in the kitchen.  Whilst at Munno Para I was lucky enough to visit the dentist and get two fillings, I wasn’t in pain but knew I had a hole and didn’t want any infections while travelling in the outback. 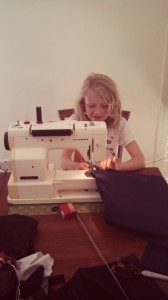 Jakayla also discovered a love of sewing and with a bit of help from Nanna, she whipped up some lovely clothes for her stuffed animals and some bags for Dad to use. 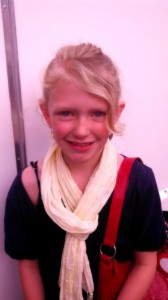 On the 26th, Jakayla turned 9 years old!  Hard to believe our baby is 9.  We had originally planned on taking her (and the family) to Tea Tree Pool where there are slides, but the slides don’t run on a school day, so a frantic plan B; we all went to Glenelg for the day via a train and tram.  It was a fun but long day and we were all happy to get back to the house and I cooked Jakayla’s favourite meal of chicken kiev and then a birthday cake.

On the Thursday Wayne discovered that one of the springs on the van had broken, and after ringing around trying to find someone to replace it, all we could do in the end was get it fixed, but it took 4 days for the repairs to be completed.  A bit of a bummer as we planned on leaving on the Friday, but we took the extra days to go for a drive through the Barossa Valley and got the opportunity to go to Tea Tree Pool and we had an awesome time on the slides!!!!  We also found an amazing op-shop in Gawler, I have never seen so many clothes in one place, and to make it sweeter, everything was half price.  I bought a cute dress for $2 and the kids bought a top each for $1.  I cant believe that more people don’t shop and support op-shops! 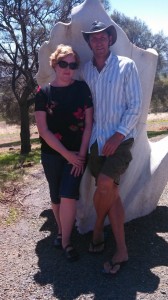 Wayne picked up our new spring on the Monday and Tuesday morning we were ready to head off towards the Yorke Peninsula.  We arrived in Ardrossan on the 4th March and went straight to the jetty.  I actually saw some squid swimming around (totally ignoring our lure of course!).  We stayed for the next two nights at Port Julia campground, combining our time with schooling, walking on the beach and squidding! 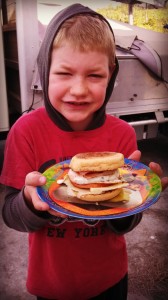 Rory about to tuck into one of Dad’s bacon, egg and cheese muffins for breakfast!

On the 6th we left for Marion Bay, where Wayne spent a lot of time in his childhood as his parents owned a holiday shack which they took every opportunity to visit (school holidays, long weekends etc).  It’s a lovely coastal town, and has certainly grown since Wayne was last here.  After a quick fish/squid, we drove to the Innes National Park and setup in the Stenhouse Bay campground.  This is a huge park, with 21 sites and they are all really big.  As soon as we drove in we saw kangaroos and have since seen quite a few emu families walking around.  Even as I type this I can see emu walking around!  We have taken wonderful drives through the national park and seen ship wrecks and lighthouses and been on beach walks.  The kids have enjoyed riding their scooters around the camp sites and even the long drop toilet isn’t too bad!  We met a lovely family tenting near us.  They even invited us to go beach fishing on Saturday afternoon.  No luck with any fish but the boys caught a couple of stingray (they were thrown back in the sea, hopefully not too pissed off!!).  We will hopefully be catching up with Matt and his family next week on our way past, heading towards Port Pirie. 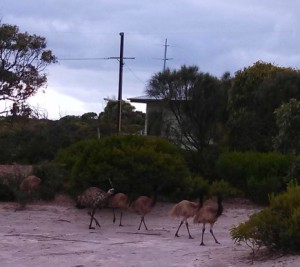 This morning our most exciting news happened, we caught some squid!  Poor Wayne, he has been trying so hard to catch some squid, getting up early in the morning or going out at night, or out in the cold wind.  He certainly gets a 10/10 for persistence!  This morning, whilst the suns rays were low in the sky, he got out of bed, jumped on the scooter and rode down to Stenhouse Bay Jetty to try his luck.  About an hour later we heard the scooter and then a hand thumping excitedly on the side of the van – he had caught two squid!  We all danced around happy to have some success.  One of the squid was enormous and the other was a bit smaller.  After breakfast we went down to the beach so Wayne could teach the kids (and me) how to clean the squid ready for calamari.  With that success, I said we had to go back down to the jetty.  About 30mins after arriving I caught a squid and nearly fell of the jetty with excitement!!!!  Then about 5 minutes later I caught another one, I had a sore mouth from smiling so much.  Then not long after, Rory cast out and next thing he has a squid!  He was amazed and stoked, so were we all LOL.  He was and is still so proud of himself.  I am so glad he gave it a go.  We then went back to the beach to clean our new additions and not long ago had a gorgeous lunch of home/van made chips and calamari.  There is even enough left to have some for tonight’s dinner.

We leave here tomorrow morning after school work and head over to Warooka (to pick up our school bag from the Post Office) and then stay nearby at a local caravan park.  Its time to wash some clothes and wash some hair LOL. 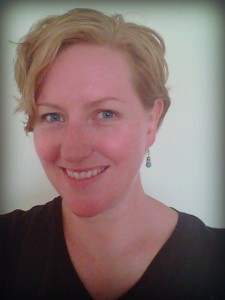 Speaking of hair, i chopped more off! I don’t think i can go back to long hair again…

Still more of Yorke Peninsula to visit, but will blog about that in a couple of weeks.  Til next time…